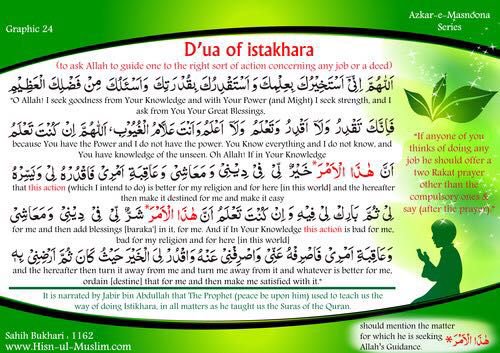 [Every Muslimah needs to know this]

Jabir Bin ‘Abdillah reported that Allah’s Messenger صَلَّى اللَّهُ عَلَيْهِ وَسَلَّمَ used to teach his companions to perform istikarah in all of their affairs, as though he was teaching them a surah from the Qur’an!
SubhanAllah ponder over this, the power of istikhara my beloved sisters!

AND INDEED, NEVER WOULD HE REGRET WHO ASKS THE CREATOR TO CHOOSE FOR HIM, AND CONSULTS WITH THE CREATION, AND ASCERTAINS HIS ACTIONS.

Messenger of Allah صَلَّى اللَّهُ عَلَيْهِ وَسَلَّمَ said,
❝Whoever directs someone to a good, then he will have the reward equal to the doer of the action.❞
[Muslim]

Share This Then Someone can benefit from this information inshaAllah